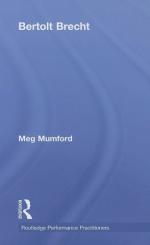 Get Bertolt Brecht from Amazon.com
View the Study Pack

This Biography consists of approximately 5 pages of information about the life of Bertolt Brecht.

The German author Bertolt Brecht (1898-1956) is probably the greatest German playwright of the first half of the 20th century. His works were often considered controversial because of his revolutionary dramatic theory and his political beliefs.

Bertolt Brecht was born on Feb. 10, 1898, in Augsburg. The son of a Catholic businessman, Brecht was raised, however, in his mother's Protestant faith. In 1917 he matriculated at the University of Munich to study philosophy and medicine. In 1918 he served as a medical orderly at a military hospital in Augsburg. The unpleasantness of this experience confirmed his hatred of war and stimulated his sympathy for the unsuccessful Socialist revolution of 1919.

In 1919 Brecht returned to his studies but devoted himself increasingly to writing plays. His first full-length plays were Baal (1922) and Trommeln in der Nacht (1922; Drums in the Night). In September 1922 Drums in the Night was presented at the Munich Kammerspiele, where...

More summaries and resources for teaching or studying Bertolt Brecht.

Bertolt Brecht from Gale. ©2005-2006 Thomson Gale, a part of the Thomson Corporation. All rights reserved.