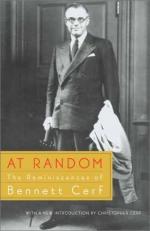 Get Bennett Cerf from Amazon.com
View the Study Pack

This Biography consists of approximately 7 pages of information about the life of Bennett Cerf.

Bennett Cerf (1898-1971) helped to shape the American publishing business into what it is today. A writer and television personality, Cerf was also an active editor and enthusiastic promoter of the writers published by his company, Random House. In the 1930s he led a successful challenge against censorship in the United States.

Bennett Alfred Cerf, the only child of Gustave Cerf, an elocution teacher and lithographer, and Frederika Wise Cerf, was born on May 25, 1898, in New York City. His mother died when he was only 15, leaving Cerf $125,000 that his maternal grandfather had placed in trust for him. Shortly after his mother's death, her brother, Herbert Wise, moved into the New York City home of the Cerfs, bringing the teenager "the greatest influence on my young life."

Cerf was educated in the public schools of New York City. He first attended Public School...

More summaries and resources for teaching or studying Bennett Cerf.

Bennett Cerf from Gale. ©2005-2006 Thomson Gale, a part of the Thomson Corporation. All rights reserved.