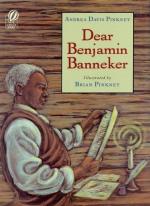 Get Benjamin Banneker from Amazon.com
View the Study Pack

This Biography consists of approximately 2 pages of information about the life of Benjamin Banneker.

Benjamin Banneker (1731-1806), an African American mathematician and amateur astronomer, calculated ephemerides for almanacs for the years 1792 through 1797 that were widely distributed.

On Nov. 9, 1731, Benjamin Banneker was born in Baltimore County, Md. He was the son of an African slave named Robert, who had bought his own freedom, and of Mary Banneky, who was the daughter of an Englishwoman and a free African slave. Benjamin lived on his father's farm and attended a nearby Quaker country school for several seasons. He received no further formal education but enjoyed reading and taught himself literature, history, and mathematics. He worked as a tobacco planter for most of his life.

In 1761, at the age of 30, Banneker constructed a striking wooden clock without having seen a clock before that time, although he had examined a pocket watch. The clock operated successfully until the time of his death.

More summaries and resources for teaching or studying Benjamin Banneker.

Benjamin Banneker from Gale. ©2005-2006 Thomson Gale, a part of the Thomson Corporation. All rights reserved.