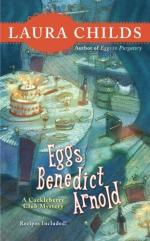 Get Benedict Arnold from Amazon.com
View the Study Pack

This Biography consists of approximately 3 pages of information about the life of Benedict Arnold.

Although he fought with skill and courage in many campaigns during the American Revolution, Gen. Benedict Arnold (1741-1801) is best known as the man who betrayed his country.

Benedict Arnold was born on Jan. 14, 1741, in Norwich, Conn., of a prominent family. As a young man, he worked for a druggist, fought in the French and Indian War, and engaged in trade with the West Indies. In 1767 he married Margaret Mansfield.

Career as a Soldier

When news of the battles of Lexington and Concord reached Arnold in April 1775, he set out at the head of a company of Connecticut militia for Cambridge, Mass., where George Washington was gathering an army to fight the British forces. His first engagement was the attack the next month on Fort Ticonderoga, where the British had a concentration of artillery. The operation was successful but Arnold got little of the credit, which went mostly...

More summaries and resources for teaching or studying Benedict Arnold.

Benedict Arnold from Gale. ©2005-2006 Thomson Gale, a part of the Thomson Corporation. All rights reserved.