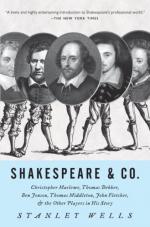 Get Ben Jonson from Amazon.com
View the Study Pack
Related Topics
Inviting a Friend to Supper
To Penshurst
On My First Son (Poem)

This Biography consists of approximately 5 pages of information about the life of Ben Jonson.

The English playwright and poet Ben Jonson (1572-1637) is best known for his satiric comedies. An immensely learned man with an irascible and domineering personality, he was, next to Shakespeare, the greatest dramatic genius of the English Renaissance.

Ben Jonson was probably born in or near London, about a month after the death of his clergyman father. He received his formal education at Westminster School, where he studied under the renowned scholar William Camden. He did not continue his schooling, probably because his stepfather forced him to engage in the more practical business of bricklaying. He spent a brief period as a soldier in Flanders and sometime between 1592 and 1595 he was married.

English literature, and particularly the drama, had already entered its golden age when Ben Jonson began his career. Jonson's special contribution to this remarkably exuberant age was his strong sense of artistic form and...

More summaries and resources for teaching or studying Ben Jonson.

Ben Jonson from Gale. ©2005-2006 Thomson Gale, a part of the Thomson Corporation. All rights reserved.