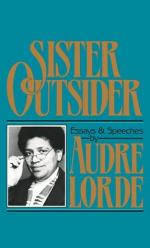 This Biography consists of approximately 5 pages of information about the life of Audre Lorde.

The African American poet Audre Lorde (1934-1992) wrote poetry exploring the relationships between lovers, children and parents, and friends in both a very personal and a socially relevant manner. She was a feminist poet who challenged racial and sexual stereotypes.

Audre Lorde was born in Harlem on February 18, 1934, to West Indian immigrants Frederick Byron and Linda Belmar Lorde. She was an introverted child who did not speak until she was five years old. When she began to communicate, she answered questions with poetry that she had memorized. The limitations of her poetic store forced her at 12 or 13 to compose her own verse.

Lorde attended a Catholic elementary school where she was the first African-American student. She suffered in an environment hostile to her own culture. The nuns, for instance, complained her braids, typical of most little African-American girls, were inappropriate for school.

At Hunter College High School she...

More summaries and resources for teaching or studying Audre Lorde.

Audre Lorde from Gale. ©2005-2006 Thomson Gale, a part of the Thomson Corporation. All rights reserved.