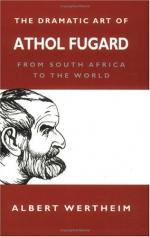 This Biography consists of approximately 5 pages of information about the life of Athol Fugard.

Athol Fugard (born 1932) is a South African playwright known for his subtle, poignant descriptions of the racial problems in his country.

Athol Fugard was born on June 11, 1932, in Middelburgh, a small village in the Karroo district in South Africa, of an English-speaking father and an Afrikaner mother. When he was three years old the family moved to Port Elizabeth, an industrial city on the Indian Ocean coast where Fugard was to spend, off and on, most of his life, and where he was to set most of his plays. He began his higher education studying motor mechanics at the technical college, but he transferred to Cape Town University to study philosophy and social anthropology.

After three years he quit school, deciding instead to hitchhike up the African continent. He became a merchant seaman in North Africa and spent two years sailing around the Far East. In...

More summaries and resources for teaching or studying Athol Fugard.

Athol Fugard from Gale. ©2005-2006 Thomson Gale, a part of the Thomson Corporation. All rights reserved.