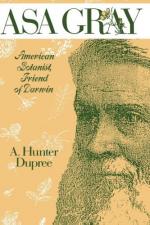 Get Asa Gray from Amazon.com
View the Study Pack

This Biography consists of approximately 1 page of information about the life of Asa Gray.

ASA GRAY (18 November 1810-30 January 1888), botanist, was born and raised in Sauquoit, New York. Although he graduated from Fairfield Medical School in 1831 with a M.D. degree, he never practiced medicine. He taught high school briefly, spending his summers on botanical field trips. On one of these he met the pioneer American botanist, John Torrey, whom he later collaborated with in writing Flora of North America (New York: Wiley & Putnam, 1838-1843). Gray's skill was quickly recognized and he was appointed curator of the New York Lyceum of Natural History in 1836, professor of botany at the University of Michigan in 1838 (though he resigned before ever visiting the school), and, finally, Fisher Professor of Natural History at Harvard College. In the latter post, which he held until his death, in Cambridge, he achieved his greatest fame and recognition as America's foremost botanist. Gray served as president of the American Academy of Arts and Sciences and the American Association for the Advancement of Science, contributed regularly to the American Journal of Science and the Nation, and authored numerous books, including his pioneering Manual of the Botany of the Northern United States (Boston: James Munroe, 1848). He is important as the chief supporter of Charles Darwin in America.

More summaries and resources for teaching or studying Asa Gray.

Asa Gray from Gale. ©2005-2006 Thomson Gale, a part of the Thomson Corporation. All rights reserved.