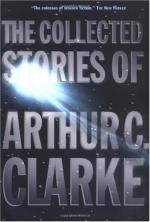 Get Arthur C. Clarke from Amazon.com
View the Study Pack

This Biography consists of approximately 6 pages of information about the life of Arthur C. Clarke.

Known as one of the modern masters of science fiction, English novelist Arthur C. Clarke (born 1917) created the immensely popular 2001 series, which became the basis for a classic film in 1968.

Arthur C. Clarke is the architect of some of the 20th Century's most enduring mythology. A futurist and science fiction writer, Clarke has penned more than 600 articles and short stories, as well as dozens of novels and collections. His work has been translated into over 30 languages and adapted on television and in Hollywood movies, most notably in the classic 1968 film 2001: A Space Odyssey. That Stanley Kubrick movie helped make Arthur C. Clarke an international celebrity. It won a whole new audience for his visionary tales about the possibilities of science and the wonders of space exploration, and solidified his reputation as one of the modern masters of science fiction.

Arthur C. Clarke from Gale. ©2005-2006 Thomson Gale, a part of the Thomson Corporation. All rights reserved.