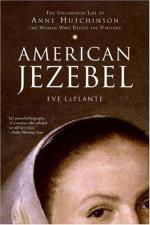 Get Anne Marbury Hutchinson from Amazon.com
View the Study Pack

This Biography consists of approximately 5 pages of information about the life of Anne Marbury Hutchinson.

English-born Anne Marbury Hutchinson (1591-1643) was banished from the Massachusetts colony and excommunicated from its church for dissenting from the Puritan orthodoxy. Her "case" was one of several prefiguring the eventual separation of church and state in America.

Anne Marbury was born in Alford, Lincolnshire, the eldest daughter of a strong-willed Anglican priest who had been imprisoned and removed from office because of his demand for a better-educated clergy. In 1605 the family moved to London, where her father was reinstated to the clergy. He died in 1611, leaving his daughter a legacy of biblical scholarship and religious independence. The following year Anne returned to her birthplace as the bride of William Hutchinson, a prosperous cloth merchant. For the next 20 years she operated the household, acquired a knowledge of medicinal herbs, and cared for over a dozen children.

Anne Marbury Hutchinson from Gale. ©2005-2006 Thomson Gale, a part of the Thomson Corporation. All rights reserved.