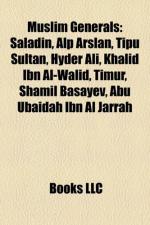 Get Alp Arslan from Amazon.com
View the Study Pack

This Biography consists of approximately 2 pages of information about the life of Alp Arslan.

Alp Arslan (1026-1072) was the second Seljuk sultan of Persia and Iraq and a member of the Turkish dynasty which revitalized Moslem rule in the declining days of the Abbasid caliphate.

Alp Arslan was born Muhammad ibn Daud in the Arab Empire's Persian province of Khurasan in 1026 (or 1029 or 1032). He was the great-grandson of Seljuk, chieftain of the Ghuzz Turkomans, who had invaded southwestern Asia in the 11th century.

Famed as a military leader, Alp Arslan--his name means "Lion Hero"--began his career campaigning extensively for his father, Daud Chaghri Beg, commander of the Turkoman forces in Khurasan. Upon his father's death in 1059/1060, Alp Arslan succeeded. Meanwhile, Seljuk forces under Chaghri's brother, Tughril Beg, had ended a century of Shiite Buyid dominance in Baghdad, whereupon Caliph al-Kaim made him sultan. With Tughril's death in 1063, Alp Arslan succeeded, despite an attempt to enthrone Tughril's brother Suleiman.

More summaries and resources for teaching or studying Alp Arslan.

Alp Arslan from Gale. ©2005-2006 Thomson Gale, a part of the Thomson Corporation. All rights reserved.