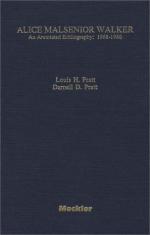 Get Alice Malsenior Walker from Amazon.com
View the Study Pack

This Biography consists of approximately 5 pages of information about the life of Alice Malsenior Walker.

Pulitzer prize-winning novelist Alice Walker (born 1944) was best known for her stories about black women who achieve heroic stature within the confines of their ordinary day-to-day lives.

Alice Walker was born on February 9, 1944, in Eatonton, Georgia, to Willie Lee and Minnie Tallulah (Grant) Walker. Like many of Walker's fictional characters, she was a sharecropper's daughter and the youngest of eight children. At age eight, Walker was accidentally injured by a BB gun shot to her eye by her brother. Her partial blindness caused her to withdraw and begin writing poetry to ease her loneliness. She found that writing demanded peace and quiet, but these were difficult commodities to come by when ten people lived in four rooms, so she spent a great deal of time working outdoors sitting under a tree.

Walker attended segregated schools which would be described as inferior by current standards, yet she...

Alice Malsenior Walker from Gale. ©2005-2006 Thomson Gale, a part of the Thomson Corporation. All rights reserved.