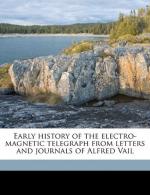 Get Alfred Vail from Amazon.com
View the Study Pack

This Biography consists of approximately 2 pages of information about the life of Alfred Vail.

World of Invention on Alfred Vail

Alfred Vail was born on September 25, 1807, in Morristown, New Jersey, where his father, Stephen, operated the Speedwell Iron Works. After completing his early schooling, Vail worked for his father and became a skilled mechanic. He then returned to school, earning his degree from the University of the City of New York in 1836. At the university in 1837, Vail observed a demonstration by Samuel Morse of his electric telegraph. Vail immediately persuaded Morse to take him on as a partner, which was a great stroke of fortune for Morse. Vail brought with him his mechanical expertise, a practical inventiveness, and his father's financial resources. Vail agreed to construct a full set of telegraph equipment (at his father's shop) and finance the American and foreign patent-application process, in return for an interest in Morse's rights to the telegraph.

During 1838, Vail helped make many improvements to Morse's original design, including a simple sending key and a much more compact size. He also worked out the final form of the Morse code, and invented a printing telegraph in 1837. By 1838 the partners were demonstrating their perfected telegraph; the superb mechanics of the system were largely Vail's contribution. In the years between 1838 and 1843, while the partners' application for a Congressional grant languished in political limbo, Vail lost interest in the telegraph and began working for his father's firm in Philadelphia, Pennsylvania. However, when Congress approved funds to construct an experimental telegraph line between Baltimore, Maryland, and Washington D.C. in 1843, Vail returned to become Morse's assistant while the line was built. Vail was the recipient, in Baltimore, of Morse's famous first message telegraphed along the line, "What hath God wrought!"

Vail remained with Morse for the next four years, publishing The American Electro Magnetic Telegraph in 1845. He retired to Morristown in 1848, intending to manufacture telegraphic equipment, but his plans were never realized. His first wife, whom he had married in 1839, died in 1852, leaving their three sons; Vail remarried in 1855. He died in poverty in January 18, 1859. Because the terms of Vail's partnership agreement specified that all patents would be in Morse's name, it is difficult to tell precisely which telegraphic innovations were Vail's invention, and to what extent.

More summaries and resources for teaching or studying Alfred Vail.

Alfred Vail from Gale. ©2005-2006 Thomson Gale, a part of the Thomson Corporation. All rights reserved.