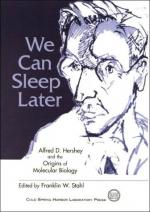 Get Alfred Day Hershey from Amazon.com
View the Study Pack

This Biography consists of approximately 2 pages of information about the life of Alfred Day Hershey.

Alfred Day Hershey was born on December 4, 1908, in Owosso, Michigan. He received his Ph.D. in bacteriology from Michigan State in 1934. He was appointed to the staff of the Department of Bacteriology at Washington University in St. Louis, Missouri. There he worked under J.J. Bronfenbrenner, who had been studying bacteriophages. A bacteriophage, or simply phage, is a type of virus that infects bacteria cells. It consists of only nucleic acid and protein. Nucleic acids, notably DNA and RNA, contain genetic material inherited by every cell. The basic structure of a bacteriophage includes a head and a tail; the head is made of protein encasing a core of nucleic acid, and the tail is protein.

During the 1940s, other scientists working with bacteriophages included Max Delbruck at Vanderbilt University in Nashville, Tennessee, who was working on the life cycle of phages, and Salvador Luria of Columbia University. Together they showed that bacterial cells can undergo spontaneous mutation in order to resist destruction by phages. Delbruck, Luria, and Hershey formed the core of the Phage Group, a group of scientists dedicated to bacteriophage research, especially those phages that infect the bacillus E. coli strain B.

In 1946, both Hershey and Delbruck, working separately, found that different strains of phage will exchange genetic material if both have infected the same bacterial cell. Hershey called this phenomenon genetic recombination. Then in 1952, at Cold Spring Harbor Laboratory in New York with Martha Chase, a geneticist, the pair discovered how phages infect bacteria. First the phage attaches itself to the bacterial cell membrane by its tail, and then the nucleic acid core is injected into the bacterial cell. The phage DNA enters the bacterial cell and then directs the cell to produce more bacteriophages. This experiment helped to prove that DNA is the genetic material of bacteriophages as well as other organisms. Throughout the remainder of the 1950s and 1960s, Hershey investigated the nucleic acid of bacteriophages, establishing that bacteriophage DNA is single-stranded, unlike the double-stranded DNA that exists in higher life forms. For their work on the replication and genetic structure of viruses, the 1969 Nobel Prize for physiology or medicine was awarded to Hershey, Luria, and Delbruck.

Hershey married Harriet Davidson in 1945. They had one son. Hershey died in 1997.

Alfred Day Hershey from Gale. ©2005-2006 Thomson Gale, a part of the Thomson Corporation. All rights reserved.