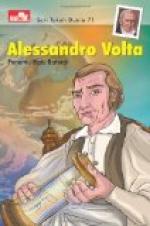 Get Alessandro Volta from Amazon.com
View the Study Pack

This Biography consists of approximately 4 pages of information about the life of Alessandro Volta.

Alessandro Volta was born on Feb. 18, 1745, in Como. He resisted pressure from his family to enter the priesthood and developed instead an intense curiosity about natural phenomena, in particular, electricity. In 1769 he published his first paper on electricity. It contained no new discoveries but is of some interest as the most speculative of all Volta's papers, his subsequent ones being devoted almost exclusively to the presentation of specific experimental discoveries.

In 1774 Volta was appointed professor of physics at the gymnasium in Como, and that same year he made his first important contribution to the science of electricity, the invention of the electrophorus, a device which provided a source of electric potential utilizing the principle of electrostatic induction. Unlike earlier...

More summaries and resources for teaching or studying Alessandro Volta.

Alessandro Volta from Gale. ©2005-2006 Thomson Gale, a part of the Thomson Corporation. All rights reserved.