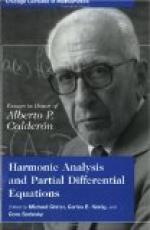 Get Alberto P. Calderón from Amazon.com
View the Study Pack

This Biography consists of approximately 4 pages of information about the life of Alberto P. Calder&oacute;n.

Alberto Calderón's (1920-1998) revolutionary influence turned the 1950s trend toward abstract mathematics back to the study of mathematics for practical applications in physics, geometry, calculus, and many other branches of this field. His award-winning research in the area of integral operators is an example of his impact on contemporary mathematical analysis.

Widely considered as one of the twentieth century's foremost mathematicians, Alberto Calderón's career spanned more than 45 years, during which he left behind many seminal works and ideas.

Calderón was born on September 14, 1920, in Mendoza, Argentina, a town at the foot of the Andes. His father was a descendant of notable nineteenth-century politicians and military officers and was a renowned medical doctor who helped found and organize the General Central Hospital of Mendoza.

After completing his secondary education in his hometown and in Zug, Switzerland, under Dr. Save Bercovici, who encouraged Calder...

Alberto P. Calderón from Gale. ©2005-2006 Thomson Gale, a part of the Thomson Corporation. All rights reserved.