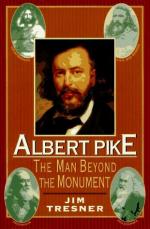 Get Albert Pike from Amazon.com
View the Study Pack

This Biography consists of approximately 12 pages of information about the life of Albert Pike.

Although there is some uncertainty about the origins of the song "Dixie," the most popular version, also probably the first, is that of Daniel Decatur Emmett (1859). Of the many variations, one of the most interesting is by Albert Pike, who made it a war hymn in 1861, beginning his version with the lines:

Pike's battle cry continues through several stanzas. It is indicative of his literary reputation that his hymn is now hardly known at all.

Had Pike's contemporaries envisioned a literary assessment of his work...

More summaries and resources for teaching or studying Albert Pike.

Albert Pike from Gale. ©2005-2006 Thomson Gale, a part of the Thomson Corporation. All rights reserved.