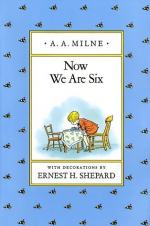 Get Alan Alexander Milne from Amazon.com
View the Study Pack

This Biography consists of approximately 5 pages of information about the life of Alan Alexander Milne.

A.A. Milne (1882-1956) worked as an essayist, a playwright, a poet, and an adult novelist, in addition to his important contribution as an author of juvenile books. Although he attempted to excel in all literary genres, he was master of Christopher Robin and Winnie-the-Pooh. His nature defied labels, such as "writer of children's literature," even though that was where he excelled.

Modern-day readers might be surprised to learn that A.A. Milne did more than just write children's books, specifically the four books which remain popular today: When We Were Very Young, Winnie-the-Pooh, Now We Are Six, and The House at Pooh Corner. Milne jumped from one creative venture to another, reluctant to concentrate his attention in one field for any extended period of time.

Born Alan Alexander Milne on January 18, 1882, in London, England, he was the youngest child of Sarah Maria Heginbotham and...

Alan Alexander Milne from Gale. ©2005-2006 Thomson Gale, a part of the Thomson Corporation. All rights reserved.