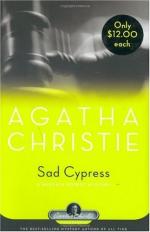 This Biography consists of approximately 4 pages of information about the life of Agatha Christie.

Agatha Christie (1890-1976) was the best selling mystery author of all time and the only writer to have created two major detectives, Poirot and Marple. She also wrote the longest-running play in the modern theater, The Mousetrap.

The daughter of an American father and a British mother, Agatha Mary Clarissa Miller was born at Torquay in the United Kingdom on September 15, 1890. Her family was comfortable, although not wealthy, and she was educated at home, with later study in Paris. In 1914 she was married to Col. Archibald Christie; the marriage produced one daughter.

In 1920 Christie launched a career which made her the most popular mystery writer of all time. Her total output reached 93 books and 17 plays; she was translated into 103 languages (even more than Shakespeare); and her sales have passed the 400 million mark and are still going strong.

It was in her first book, The Mysterious Affair at Styles...

More summaries and resources for teaching or studying Agatha Christie.

Agatha Christie from Gale. ©2005-2006 Thomson Gale, a part of the Thomson Corporation. All rights reserved.