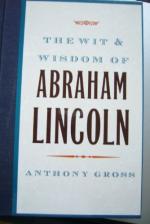 This Biography consists of approximately 9 pages of information about the life of Abraham Lincoln.

Sixteenth president of the United States and president during the Civil War, Abraham Lincoln (1809-1865) was immortalized by his Emancipation Proclamation, his Gettysburg Address, and two outstanding inaugural addresses.

Abraham Lincoln was born on Feb. 12, 1809, in a log cabin on a farm in Hardin County, Ky. His father had come with his parents from Virginia and had grown to manhood on the Kentucky frontier. He had evidently become moderately successful as a farmer and carpenter, for in 1803 he was able to pay £118 cash for a farm near Elizabethtown. Three years later he married Nancy Hanks, described as "intelligent, deeply religious, kindly, and affectionate," but as "illiterate" as himself. Of her family and background little authentic is known.

The young couple soon moved to the one-room cabin on Nolin Creek where their second child, Abraham, was born. Two years later the family moved to the farm on...

More summaries and resources for teaching or studying Abraham Lincoln.

Abraham Lincoln from Gale. ©2005-2006 Thomson Gale, a part of the Thomson Corporation. All rights reserved.