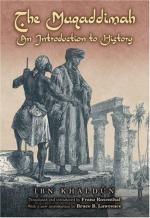 Get Abdel Rahman Ibd-Khaldun from Amazon.com
View the Study Pack

This Biography consists of approximately 1 page of information about the life of Abdel Rahman Ibd-Khaldun.

Abdel Rahman Ibd-Khaldun (1332-1406) was a scholar, teacher, political advisor and activist in north Africa and southern Europe in the late fourteenth century. Ibd-Khaldun was among the earliest scholars to focus his work on social and historical factors and the interaction of the two. Ibd-Khaldun was born in Tunis to an educated family and was schooled in mathematics, history and religious studies and later became quite active politically serving various leaders in his homeland as well as in Spain, Morocco, and Algeria as an ambassador and scholar. During this time, Ibd-Khaldun was imprisoned for several years for questioning the divinity of social and state leaders. After more than twenty years in political life, Ibd-Khaldun devoted himself to a more focused study of historical and social questions which eventually led him to a position as lecturer at Al-Azhar Mosque in Cairo. His lectures grew in popularity and focused on the importance of recognizing social thought and linking this early sociology with historical observation. Ibd-Khaldun also was among the first to study the interrelation of what would later be termed social institutions and to compare then modern society with primitive social organizations.

Ibd-Khaldun was among the first to formalize sociological questions and to recognize the link between historical time frame and construction of society. Although his work did not "pave the way" for the advent of the discipline of sociology, which is typically traced to Comte in the mid-1800s, it does demonstrate that sociological thought and study did take place outside of a strictly western setting and far before the enlightenment. Ibd-Khaldun's accurate place in the history of sociology is likely in company of scholars like the Scottish moralist philosophers as early evidence of sociological style analysis taking place prior to the formalization of the discipline.

Abdel Rahman Ibd-Khaldun from Gale. ©2005-2006 Thomson Gale, a part of the Thomson Corporation. All rights reserved.