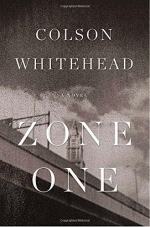 Get Zone One from Amazon.com

Everything you need to understand or teach Zone One by Colson Whitehead.

Colson Whitehead’s dystopian literary novel, Zone One, follows sweeper Mark Spitz on a three-day, flashback-filled journey through Manhattan after a plague wipes out much of the human population. As a sweeper, Mark Spitz and other survivors attempt to rid a small area of Manhattan, called Zone One, of zombie-like figures. Mark Spitz, a man of self-proclaimed mediocrity, finds a calling in the apocalyptic city—he is an expert at killing skels and surviving in the plague’s scarcity. Mark Spitz spends much of the novel considering the rituals and systems that comprised and defined human life before the apocalypse. Now that such systems and routines are obsolete, Mark Spitz wonders what role these systems served, and what, if anything, governs his current disorderly reality.

The Zone One Study Pack contains:

You might also be interested in:
Sag Harbor
The Underground Railroad (novel)
The Intuitionist: A Novel
Apex Hides the Hurt
John Henry Days
The Nickel Boys
Harlem Shuffle