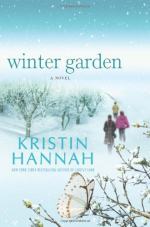 Get Winter Garden from Amazon.com

Everything you need to understand or teach Winter Garden by Kristin Hannah.

In Winter Garden, a historical novel by Kristin Hannah, Evan Whitson was lying on his death bed when he made his daughters promise they would ask their mother, Anya Whitson, to tell them the complete version of a fairy tale she had told when they were children. The daughters, Meredith Whitson Cooper and Nina Whitson, had long ago decided that their mother was a cold woman who did not love them. However, they followed through on their promise to their father. As they began to hear the story their mother told, they realized there was much about their mother that they never knew. The author incorporates the motif of the fairy tale as she addresses the relationships between mothers and daughters and the weight of promises.

You might also be interested in:
On Mystic Lake
The Nightingale
The Great Alone
Magic Hour: A Novel
Firefly Lane