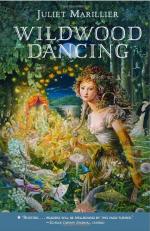 Get Wildwood Dancing from Amazon.com

Everything you need to understand or teach Wildwood Dancing by Juliet Marillier.

Jena is the second oldest daughter of a family of five. When Jena is only five years old, she is playing near her home with her cousins, Cezar and Costi. An old crone, who is later revealed as a witch, encounters them and offers to grant their wishes if they give her something they treasure. Jena trades her crown to become the Queen of the Fairies. Cost trades his family ring...