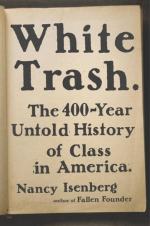 Get White Trash: The 400-Year Untold History of Class in America from Amazon.com

Everything you need to understand or teach White Trash by Nancy Isenberg.

Nancy Isenberg presents a meticulously researched historical study delving into the roots of the current American class system in "White Trash." Americans have historically denied the existence of class disparities in the land of opportunity, but Isenberg's 400-year long history makes that impossible from here forward. By examining the rhetoric of historical figureheads, Isenberg dissects American class history from the inside out while simultaneously injecting reality into this often flowery rhetoric. Her study ranges from the dawn of American colonization to the recent television hit Honey Boo Boo, continuously tracking the dynamic history of class relations in America.