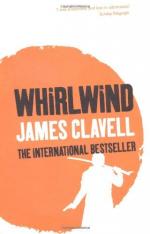 Get Whirlwind from Amazon.com

Everything you need to understand or teach Whirlwind by James Clavell.

W hirlwind tries to make sense of one of the most apparently senseless phenomena of recent times, the Iranian retreat from rationalism, prosperity, and modernity caused by the overthrow of the Shah. With the accession to power of the Ayatollah Khomeini, the country returned to stultifying religious fundamentalism, systematic denial of individual rights, and hopeless poverty. Why would a country return to the dark ages? Even more incredibly, why would those people with the most to lose — women, students, and businessmen — support such atavism?

Clavell methodically demonstrates why the clergy supported the Ayatollah Khomeini — to institute Islamic orthodoxy and to increase the power of their leaders. He also explains that businessmen supported Islam, primarily because they were totally corrupt and believed that social change would not harm them. Even the secularly oriented urban middle-class professionals, military officers, students, and women were...