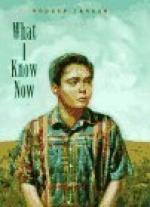 Get What I Know Now from Amazon.com

Everything you need to understand or teach What I Know Now by Rodger Larson.

What I Know Now Summary

What I Know Now is a novel about Dave Ryan, a fourteen-year-old boy who falls in love with a man who comes to his house to build a garden, and about the experience of growing up and learning about love and self-acceptance. It is a coming-of-age novel, and it details Dave's struggles during the summer of 1957 to understand his sexual and emotional self. Dave is probably gay, though Larson never says that directly, but rather makes the issue of coming out secondary to the issue of emotional growth and self-awakening. At the beginning of the summer Dave feels alienated and un loved by his father, and after the separation of his parents, he must deal with leaving his father and his brother Brad back at their ranch while he and his mother try to build a new life. By the end of the summer, Dave is well on...

The What I Know Now Study Pack contains:

What I Know Now Short Guide