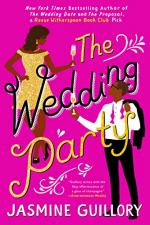 Get Wedding Party from Amazon.com

Everything you need to understand or teach Wedding Party by Jasmine Guillory.

The Wedding Party is a novel by Jasmine Guillory. The story follows Maddie Forest and Theo Stephens. Maddie believed Theo was uptight and pretentious. Theo thought Maddie was a party girl who cared only about her appearance. After Theo and Maddie were both asked to join the weeding part of a mutual friend, Maddie and Theo began to realize that they had more in common than they had once believed. They soon develop a sexual relationship. Believing their fling will never be long term, Maddie and Theo decide to keep it from Alexa because they think it will ruin her wedding when they break up. In the end, Maddie and Theo realize that they actually have deep feelings for each other. Themes in the novel include relationships, race, stress, charity, and health.