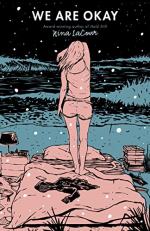 Get We Are Okay from Amazon.com

We Are Okay Summary
LaCour, Nina

Everything you need to understand or teach We Are Okay by LaCour, Nina .

We Are Okay Overview

In her young adult coming-of-age novel titled We Are Okay, Nina LaCour chronicles a teenage girl named Marin and her personal struggles to leave behind her old life in California now that she is in college in New York. Marin left her home in San Francisco the day that her grandfather committed suicide, and she has not spoken to anyone from California since this departure, not even her best friend Mabel. During their first winter break of college, Mabel decides to visit her old friend Marin in New York despite having been ignored by Marin for months. During this trip, Marin reveals much about the sorrowful truth she discovered about her grandfather on the day he killed himself. The novel ends with their having rekindled their friendship. LaCour’s novel is written from the first-person present tense point of view and explores themes such as denial, haunting, and family.

The We Are Okay Study Pack contains:

We Are Okay Study Guide