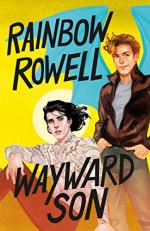 Get Wayward Son from Amazon.com

Everything you need to understand or teach Wayward Son by Rainbow Rowell.

Rainbow Rowell's novel Wayward Son is the sequel to Carry On. As the first book of the series, Carry On introduced Simon Snow as the main character. Simon was once a powerful magician who lost his magic. In Wayward Son, he now has wings and a tail. He uses these physical oddities as a reason to hide out in his apartment until his friends Penny and Baz push him to spend a couple of weeks in America. In America, Simon and the others meet up with a young man who knows a lot about magic, and they encounter vampires who rule Las Vegas. As Simon's group sets out to rescue their friend Agatha from some young vampires who are trying to code magic into their own DNA, they find themselves in a showdown that ends with several dead vampires. On a positive note, Simon is finally looking forward to the future. The novel's main themes are self-image, coming of age, and the lack of tolerance among groups.