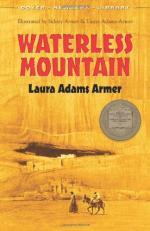 Get Waterless Mountain from Amazon.com

Everything you need to understand or teach Waterless Mountain by Laura Adams Armer.

Many books about Native Americans, such as Shannon Garst's Crazy Horse, Brent Ashabranner and Russell Davis's Chief Joseph, and Dee Brown's Bury My Heart at Wounded Knee, focus on the cultural clashes and inevitable wars between Native Americans and white settlers. While these stories are historically accurate and often depict the human side of the Native Americans, their main purpose is to detail the bloody clashes.

On the other hand, Armer's Waterless Mountain, like Jim Kjelgaard's Wolf Brother and Dyre W. Doughty's Crimson Moccasins, falls into a category of books that focus on Native American life, folklore, and religious beliefs, providing insight into a rich culture. Because Armer lived among the Navajo and increased her understanding of their culture through research and firsthand experience, her work demonstrates a strong grasp of the Navajo perspective.

Armer's novels are set in the 1920s, after the major cultural clashes and battles...