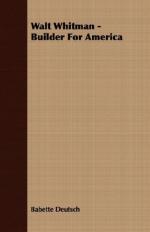 Get Walt Whitman: Builder for America from Amazon.com

Everything you need to understand or teach Walt Whitman by Babette Deutsch.

Ernest Hemingway maintained that American literature began with Huckleberry Finn, but if he had narrowed the category to American poetry, he would have had to acknowledge the primacy of Walt Whitman. "It was you that broke the new wood," Ezra Pound once said in grudging acknowledgment of a poet he disliked but whose extraordinary originality he recognized. While some excellent poetry had been written in the United States before Whitman's publication of Leaves...