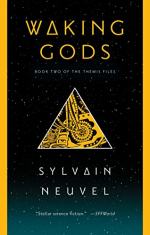 Get Waking Gods from Amazon.com

Everything you need to understand or teach Waking Gods by Sylvain Neuvel.

The second installment in Sylvain Neuvel’s Themis Files series, Waking Gods is a science-fiction thriller told through a series of files, news reports, and journal entries that explores the possibility of aliens interacting with humans on Earth. As a child, Rose Franklin discovered a giant metal hand buried deep in the ground. Now, she is the lead scientist researching Themis, the robot to whom this hand belongs, with help from a well-connected, but mysterious unnamed interviewer, an ex-military pilot Kara Resnik, and a brilliant linguist Vincent Couture. This novel explores the following themes: the potential for a superior alien race, understanding new technology, family conventions, ethical decision-making, and the intricacies of disclosing sensitive information.