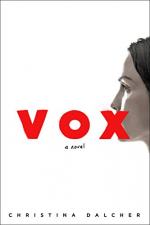 Get Vox from Amazon.com

Everything you need to understand or teach Vox by Christina Dalcher.

In the novel Vox by Christina Dalcher, neurolinguist Jean McClellan must weigh the cost of freedom when she fights against dystopian leaders who intend to return America back into a country ruled by men. Jean is given an unusual opportunity to learn what the government has planned for the people when she is called to resume her work in fluent aphasia research after the president’s brother has a skiing accident that damages the Wernicke’s area of his brain. Jean and her teammates decide to fight back when they learn that their cure is being reverse engineered into a curse. Themes in the novel include the cost of one’s freedom, the characteristics of a dystopian society, and the power of language.