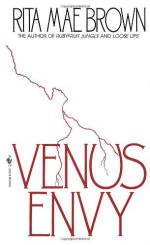 Get Venus Envy from Amazon.com

Everything you need to understand or teach Venus Envy by Rita Mae Brown.

True to established form, Rita Mae T Brown's fiction incorporates many social concerns which often have to do with being the outsider or the minority in a given situation or community. Predictably, Brown deals mostly with women, gays and people of color, how society reacts to these groups, and how these groups react to society.

Venus Envy, while touching on topics such as AIDS, alcoholism, male friendships, female friendships, dysfunctional families, class tensions and racial barriers, retains as its overarching concern the survival of the gay woman in the maledominated heterosexual world.

Brown's major theme in this novel consists of an expose and criticism of the social norms and expectations which trap people into acting contrary to their true nature, and thus prevent them from achieving fulfillment and happiness. The institution of marriage takes a beating in this novel, as all the people who...