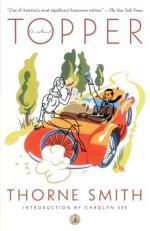 Get Topper from Amazon.com

Everything you need to understand or teach Topper by Thorne Smith.

The novel Topper satirizes the newly developed upper middle class in American society: its pretension, hypocrisy, conformity, and insistence on conventional moral behavior. Like all of Smith's novels, it also attacks the Volstead act, which left America dry and dependent on homemade or illegally procured alcohol. Its major theme might be termed "immoral" regeneration, as the staid banker Topper is transformed from a conventional lawabiding citizen to a drunken playboy and potential adulterer. But it is purely escapist literature: For all of his mockery of bourgeoisie wealth and ways, Smith's joyful wickedness has meaning only within the confines of that class.

The symbols of success are fast cars, beautiful women, expensive clothing, and dwellings with appropriately exclusive addresses. It is an exclusively white, Anglo-Saxon world, where all Irish are policemen, all blacks are servants, and all Italians sell food. Illicit sex is praised, no...