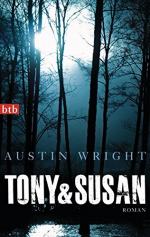 Get Tony and Susan from Amazon.com

Everything you need to understand or teach Tony and Susan by Austin Wright.

Tony & Susan is a literary thriller mystery novel by Austin Wright in which Susan reads a manuscript entitled Nocturnal Animals, written by her ex-husband Edward, wherein a professor named Tony takes revenge against the redneck thugs who raped and killed his wife and teenage daughter. Tony & Susan tackles the idea that authors put much of themselves into their work and that people invent aspects of their lives and their pasts in order to make them more palatable.