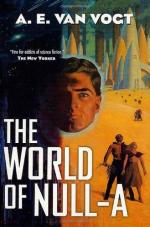 Get The World of Null-A from Amazon.com

The World of Null-A Summary
A. E. van Vogt

Everything you need to understand or teach The World of Null-A by A. E. van Vogt.

The World of Null-A Summary

Van Vogt's attack on Aristotelianism dominates every part of The World of Null-A; its grand vision unifies the novel. Even so, the novel contains several of van Vogt's favorite motifs.

The World of Null-A has the unifying philosophy that Slan lacks, but it echoes Slan's concerns with morality, the tragedy of life, and the question of what constitutes a normal life. The followers of Null-A struggle toward an ill-defined moral life, but even Gosseyn learns to kill ruthlessly; he unhesitatingly kills two guards: "The guards were symbols, he decided bleakly, symbols of destruction." By calling the guards symbols, he refutes what they really were — unique men. The moral ambiguity is echoed in van Vogt's tragic vision: People tend to die meaningless deaths, often as unwitting pawns of others.

The idea of a "normal life" is a welldeveloped theme and is focused on the concept of self-identity. In...

The The World of Null-A Study Pack contains:

The World of Null-A Short Guide

A(lfred) E(lton) Van Vogt
7,163 words, approx. 24 pages
Without doubt, A. E. van Vogt was the first great Canadian science-fiction writer. In his heyday he was one of the most popular science-fiction authors in the world and is considered to belong to the ... Read more

A(lfred) E(lton) Van Vogt
3,415 words, approx. 12 pages
A. E. van Vogt was recognized as a major science-fiction talent with the publication of his first story, "Black Destroyer," in the July 1939 issue of Astounding Science-Fiction. (It was later to becom... Read more
Download the Study Pack