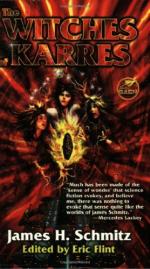 Get The Witches of Karres from Amazon.com

Everything you need to understand or teach The Witches of Karres by James H. Schmitz.

The Witches of Karres Summary

The Witches of Karres combines an unconventional young man's search for his niche in life with an elaborate narrative of political and commercial intrigue on a grand scale. In this book, set in the distant future, humanity has colonized much of the galaxy, and has diversified into a variety of types, some with very special powers. It is a chance encounter with three young citizens of the planet Karres, whose metaphysical powers have earned them and their community the title of witches, that propel the young man into strange adventures.

Among its most timely themes, common to Schmitz's work, is the idea that each individual needs to be capable of taking care of himself. Female and male characters, human or otherwise, are equally represented in every profession, from shipwright to secret agent.

The The Witches of Karres Study Pack contains:

The Witches of Karres Short Guide

James H(enry) Schmitz
1,090 words, approx. 4 pages
James Henry Schmitz as a writer of science fiction combines acceptable improbabilities with good prose. His work, often republished, is obviously enjoyed by his readers, and the comments of the editor... Read more
Download the Study Pack