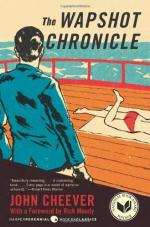 Get The Wapshot Chronicle from Amazon.com

Everything you need to understand or teach The Wapshot Chronicle by John Cheever.

Attempting in The Wapshot Chronicle to capture the "irrecapturable" past, Cheever creates the setting of St.

Botolphs, a romanticized version in part of his hometown of Quincy, Massachusetts, and the Wapshot family, unmistakably modeled after his own: Leander, his wife Sarah, and their sons, Moses and Coverly. Throughout the novel, Cheever charts the decline and ultimate resurrection of the Wapshots, simultaneously recognizing their limitations and celebrating their possibilities. It is essentially this cast of characters in conjunction with the setting that gives the novel its charm, substance, and conflict. An important ingredient to plot development, the setting of St.

Botolphs enables Cheever to systematically parallel the nearly extinct attributes of tradition and ceremony to the increasingly untraditional present of the novel.

The novel's central figure is Leander, the embodiment of a genteel New England aristocracy in direct confrontation with contemporary decadence, hypocrisy, and emptiness. Cheever is comparing the...

John Cheever
7,967 words, approx. 27 pages
Although some critics have dismissed Cheever as a writer of the "New Yorker school," a chronicler of suburbia, or a clever satirist, his impressive achievements in both the short story and the novel b... Read more

John Cheever
9,634 words, approx. 33 pages
To outward appearances John Cheever was very much a child of the American twentieth century. Born just before World War I, he lived through the halcyon Jazz Age, suffered through the Depression, and... Read more

John Cheever
10,234 words, approx. 35 pages
Few American writers have been so clear in mapping their recurrent subject matter and themes as John Cheever. From his first published story, "Expelled," he has been concerned with the Fall from a co... Read more

John Cheever
8,365 words, approx. 28 pages
Biography EssayAlthough some critics have dismissed Cheever as a writer of the "New Yorker school," a chronicler of suburbia, or a clever satirist, his impressive achievements in both the short story... Read more