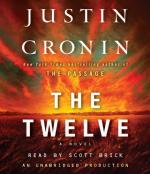 Get The Twelve (novel) from Amazon.com

Everything you need to understand or teach The Twelve (novel) by Justin Cronin.

The Twelve (Book Two of the Passage Trilogy): A Novel Summary

The world has been taken over by virals, an altered race of vampiric creatures who kill and turn every human they can reach. Like traditional vampires, these creatures tend to hunt at night so humans are reasonably safe during the daytime. Humans can typically move around freely during the daytime though there are some daytime attacks that occur. The communities of humans who are surviving are usually forced to live behind...

The Twelve (Book Two of the Passage Trilogy) Study Guide