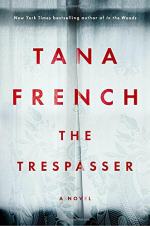 Get The Trespasser from Amazon.com

Everything you need to understand or teach The Trespasser by Tana French.

Tana French’s murder mystery novel, The Trespasser, is told from the perspective of murder detective Antionette Conway as she tries to solve the mystery of a young woman murdered in her home. This novel is the sixth in a series of murder mystery novels focusing on various members of the murder squad in Dublin, Ireland. Conway is having a difficult time with other members of her squad. She works with her partner Steve Moran to figure out whether or not her squad is against her finding out who truly murdered the “perfect” Aislinn Murray, or if it is all in her head. The themes that come up in this novel are: independence, parental relationships, loyalty, trespassing, and control.

The The Trespasser Study Pack contains:

You might also be interested in:
Faithful Place
Broken Harbor
The Witch Elm
The Likeness
In the Woods