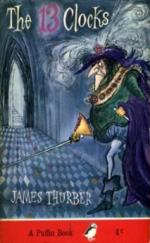 Get The Thirteen Clocks from Amazon.com

Everything you need to understand or teach The Thirteen Clocks by James Thurber.

In his foreword to The Thirteen Clocks, Thurber says that he wrote the story in a fit of escapism and self-indulgence, but then also says, "Unless modem Man wanders down these byways occasionally, I do not see how he can hope to preserve his sanity."

The Thirteen Clocks is a delightful fairy tale filled with magic and absurdity, swordplay and wordplay. In this fantasy, the invincible prince, Zorn of Zorna, rescues Saralinda, a radiant princess, from the cold-hearted Duke who stole her when she was a baby.

Within this light-hearted story is a serious moral lesson. There are coldhearted forces in the real world that, like the evil Duke, try to grasp power by belittling love and imagination, self-indulgence and escapism. Thurber wants to release the reader from those forces into simple mental recreation. This tale opens the byways of play and turns the reader loose upon them...

James Grove Thurber
385 words, approx. 2 pages
James Grove Thurber (1894-1961) was an American writer and artist. One of the most popular humorists of his time, Thurber celebrated in stories and in cartoons the comic frustrations of eccentric and ... Read more

James Grove Thurber
15,031 words, approx. 51 pages
Biography EssayIn a general survey of American humor, James Thurber comes after the traditional horsesense humorists and before the black humorists of the postatomic era. His most famous and most endu... Read more

James (Grover) Thurber
14,253 words, approx. 48 pages
In a general survey of American humor, James Thurber comes after the traditional horse-sense humorists and before the black humorists of the postatomic era. His most famous and most enduring work deve... Read more

James (Grover) Thurber
2,834 words, approx. 10 pages
The name of James Thurber is immediately recognized by the majority of Americans as the author of hundreds of humorous essays and the artist of innumerable cartoons featured in the New Yorker during t... Read more

James (Grover) Thurber
7,170 words, approx. 24 pages
Next to Mark Twain, James Thurber is the most critically acclaimed humorist in American literary history. Like Twain he first established his reputation as a journalist. By the time he died, he was re... Read more

James Thurber
6,039 words, approx. 21 pages
Called "one of the world's greatest humorists" by Alistair Cooke in the Atlantic, James Thurber was one of the mainstays of the New Yorker magazine, where his short stories, essays, and numerous carto... Read more
Download the Study Pack