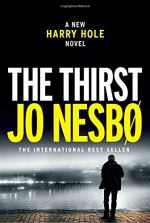 Get The Thirst: A Harry Hole Novel from Amazon.com

Everything you need to understand or teach The Thirst by Jo Nesbo.

In The Thirst by Jo Nesbø, happily retired detective Harry Hole is called back into action to help catch the only serial murderer who had gotten away from him. At the same time, Harry’s wife becomes seriously ill, forcing the detective to choose between his family and stopping a murderer. Themes in the novel include ambition as both a positive and negative force, the use of technology in crime and investigation, and the role of media in disasters.

The The Thirst: A Harry Hole Novel Study Pack contains: