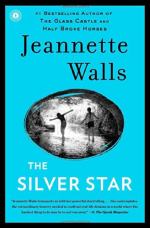 Get The Silver Star from Amazon.com

Everything you need to understand or teach The Silver Star by Jeannette Walls.

Twelve-year-old narrator Jean “Bean” Holladay learns that justice can come in strange ways in the novel “The Silver Star” by Jeanette Walls. Told in past tense, the novel tells how Bean and her sister, Liz, set off across the county to live with their Uncle Tinsley after their mother left them alone to find herself. In their attempt to be self-sufficient the girls got jobs with a man, Jerry Maddox, who had a reputation for being a bully. When Maddox tried to rape Liz the family filed charges against him but Maddox was found not guilty by a jury. Maddox did, however, get what he had coming to him from an unusual source. This coming of age story of family and sisterhood includes themes of the positive and negative aspects of living in a small town as well as the inconsistent nature of truth and lies.