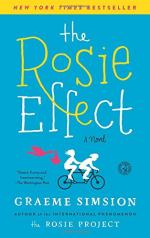 Get The Rosie Effect from Amazon.com

Everything you need to understand or teach The Rosie Effect by Graeme Simsion.

A stranger’s comment made in anger led scientifically minded Don Tillman to doubt his ability to be a good father in the novel “The Rosie Effect” by Graeme Simsion. After a disastrous Sunday lunch social worker Lydia Mercer told Don he should do the world a favor and not have children. A short while later Don’s wife surprised him with the announcement that they were pregnant. Themes explored include the differences in relationships as well as the social stigma attached to people who are different as Don tried to prove to his wife, and himself, the he could be a good father.