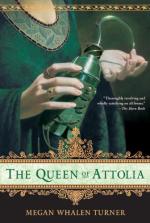 Get The Queen of Attolia from Amazon.com

Everything you need to understand or teach The Queen of Attolia by Megan Whalen Turner.

The Queen of Attolia Summary

In a genre crowded with series whose heroes and adventures seem much the same from one book to the next, The Queen of Attolia stands out. It is a sequel to the author's much acclaimed previous novel The Thief. While it has the same protagonist— Eugenides, the Thief of Eddis—the young hero has changed significantly since his quest for the legendary Hamiathes' Gift. He is not so apt to spout off wry comments or insults simply to get a reaction, and he has learned that the world does not revolve around him. He still has a healthy pride in his work and his judgement, however. In the sequel, this trait both gets him into worse straits than he has ever been in before and leads him to an exquisite revenge— or redemption. After having his hand cut off by the cold, beautiful Queen of...

The The Queen of Attolia Study Pack contains:

The Queen of Attolia Short Guide