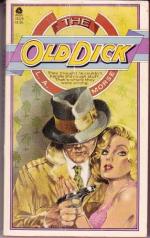 Get The Old Dick from Amazon.com

Everything you need to understand or teach The Old Dick by L. A. Morse.

The Old Dick includes themes common to detective fiction, such as the value of the private eye's independence and the unmitigated villainy of his major antagonists, but much of the novel emphasizes what Mark Twain has called "the wanton insult of old age." Throughout the novel one encounters characters who are intelligent, perceptive, competent, and skilled, but whose age renders them insignificant in society's view. Spanner resolves an incredibly difficult case, at one...