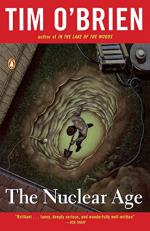 Get The Nuclear Age from Amazon.com

Everything you need to understand or teach The Nuclear Age by Tim O'Brien.

Tim O'Brien's novel The Nuclear Age spans from 1958 to 1995 in the life of a perpetually anxious, politically conscious man from Montana named William. In 1995, William is a married middle-aged man and father of a 12-year-old daughter he spends his time obsessively digging a nuclear fallout bunker in his backyard. As William's wife and daughter get ready to leave him, due to his increasingly erratic state, he recalls his decades-long career of political subversiveness with a small group of Vietnam-draft-dodging friends he had met in college in the sixties. The novel tackles the themes of war, sanity, and unrequited love.

You might also be interested in:
Going After Cacciato
How to Tell a True War Story
If I Die in a Combat Zone, Box Me Up and Ship Me Home
In the Lake of the Woods
The Things They Carried