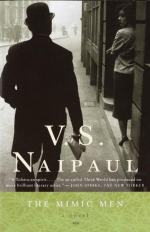 Get The Mimic Men: A Novel from Amazon.com

Everything you need to understand or teach The Mimic Men by V.S. Naipaul.

The Mimic Men: A Novel Overview

The Mimic Men is a novel in the form of a memoir. The narrator and main character, Ranjit Kripal Singh, tells the story of his life as a man from a late-colonial background Singh is of Indian heritage but was born on the British-colonized island of Isabella, which is based on the author’s own birthplace of Trinidad. The novel is contemplative and nonlinear, divided into three distinct sections that each focus on a different period of the narrator’s life. The novel examines themes of colonialism, economics, politics, love, friendship, and family.

The The Mimic Men: A Novel Study Pack contains: